Parajanov lived on Kote Meskhi street on Mtatsminda district for years. On his way home he had to pass the very lane that will be named after him in the coming future.

A famous photo of Sergei Parajanov, named The Black Raven in Flight was taken by famous photographer Yuri Mechitov 40 years ago near the Kote Meskhi street. 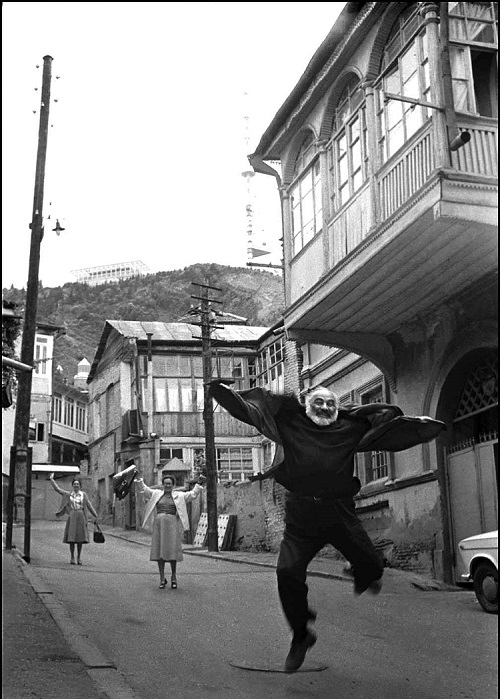 The Black Raven in Flight by Yuri Mechitov.

While interviewing with Agenda.ge Mechitov remembered that day when he took the picture.

It was 11 a.m. when I visited Sergei. He had guests, colorists who were printing copies of the second Great masterpiece of Parajanov – The Colour of Pomegranates. We [me, Parajanov and Guests] headed down Arsena street and then turned to Tkhinvali street… I guess Parajanov had been nurturing the idea for a long time. ‘Well, here we are around the best view of Mount Mtatsminda, where we can produce a breathtaking shot’, the maestro said and indicated the spot, from which I would photograph the future masterpiece… Suddenly he made such an ease jump in the air, then again and again…”, Mechitov told to Agenda.ge.

Parajanov was a Soviet Armenian film director and artist who made significant contributions to Ukrainian, Armenian and Georgian cinema.

He invented his own cinematic style, which was totally out of step with the guiding principles of socialist realism – the only officially sanctioned art style in the USSR.