Two Georgian peacekeepers have been distinguished for their service within the European Union’s training mission in the Central African Republic, receiving awards from officials in Bangui.

Senior Lieutenant Aleko Pirtskhalaishvili, Deputy Commander of the National Guard of Georgia platoon and Sergeant Giorgi Tsukhishvili, an interpreter from a support group working in the mission, received their distinctions last week.

They were awarded by Henri Wanzet Linguissara, Interior Minister of the Central African Republic and Eric Gerard, Ambassador of France to the CAR, for their contribution to the EU Military Training mission in the Republic (EUTMRCA).

????????Defence Force representatives in @EUTMRCA mission awarded with medals by ???????? Minister of Interior and ????????ambassador in RCA

The awards follow a distinction received by Captain Asatiani of the National Guard last month, when the Georgian peacekeeper was handed the St George's Cross by Admiral António Silva Ribeiro, Chief of General Staff of the Portuguese Armed Forces, in Bangui.

The platoon commander was distinguished for his “high competence and unique skills” during a visit of Ribeiro and João Cravinho, Portugal’s Defence Minister, to troops of the mission. 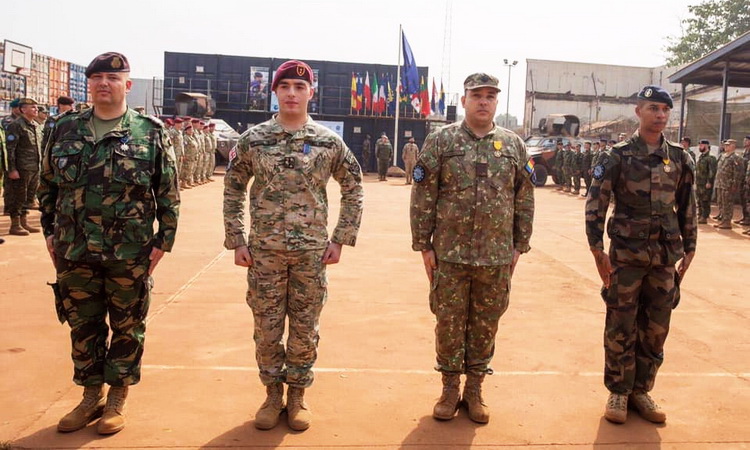 The formal ceremony was held in Bangui, where the EU mission is located. Photo: National Guard of Georgia.

The EUTMRCA was launched in 2016 to support the CAR government “in the implementation of the Security Sector Reform”, mission description from the EU said.

Concentrated on the Bangui area, the mission serves to provide strategic advice, operational training and education to personnel of the Central African Armed Forces.

The mission has involved Georgian service members since January 2017. Peacekeepers from the country have participated in various EU peacekeeping missions in the CAR since 2014.