UPDATED: opposition activists are among the 16 detained for release of private footage

The Georgian media reports that “most of the individuals” who have been detained today for the possession and release of private footage are activists of the United National Movement (UNM) and Girchi opposition parties.

The detainees have already met with their lawyers.

Sisters from Batumi Irma and Inga Khoroishvili and Giorgi Partsvania, who are activists of the UNM, are among the detainees, a lawyer and their families have confirmed.

They do not admit to the crime.

Two detainees are activists of the Girchi party, one of them is singer Giorgi Gasviani, the party confirmed.

Gasviani’s lawyer told the media that the detainee watched footage of the video on Facebook.

However, he did not download or spread it,” the lawyer said.

The Georgian Ministry of Internal Affairs has detained 16 individuals for the possession and release of private footage.

The detention comes after the statement of the Georgian Dream ruling party MP Eka Beselia, who said on 28 January that footage of her personal life recorded under the United National Movement leadership went viral.

The detainees used their social pages and special mobile applications to store the footage and released them,” the ministry reported.

The ministry stated that the crime is punishable by four to eight years in prison and called upon the public not to get involved in the spread of such footage.

Before the ministry made the statement, United National Movement opposition party members claimed that their two activists have been detained in Adjara autonomous republic for the release of the footage. 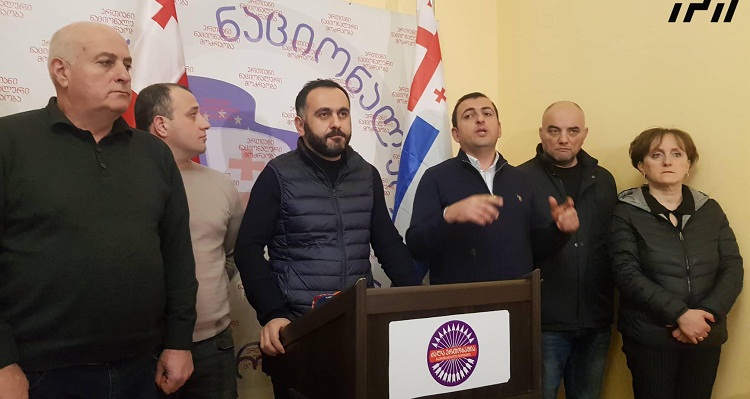 UNM confirmed its activists were detained for the release of private life footage. Photo: IPN.

They stated that the ruling party was trying to “shift the blame onto the opposition” for the offence.

The ministry did not mention neither the opposition activists nor Beselia in its statement.

Beselia stated earlier today that she will hold meetings in the Interior Ministry in the coming hours.

I provided the police with several surnames connected with the release of my personal life footage. They told me that they have also identified several others,” Beselia told the media before the statement of the ministry.

The United National Movement opposition members in Batumi held a briefing after the statement of the ministry and demanded the release of Irma and Inga Khoroishvili, who, they claim, are innocent.

Members of the UNM and the European Georgia opposition accuse the government of the release of the footage.

Levan Gogichaishvili from the ruling party and Beselia stated shortly after the Interior Ministry briefing that they want to know “who were the initiators of the release of the footage.”

Media reports and relatives confirm that singer Giorgi Gasviani is among the detainees.

Georgian Justice Minister Thea Tsulukiani stated that everyone must condemn the release of such footage as the action is “absolutely unacceptable and immoral.”

The people committing the crime will be held accountable,” she said.

She spoke about the power of women and stated that none of the women will step back and be frightened after the release of such footage.

This is my message to those who are engaged with the immorality,” Tsulukiani said.

The ministry launched an investigation into the release of the personal life footage immediately after Beselia’s statement.