The Georgian Embassy to Germany has sent an official letter to the German Public Broadcaster and the author of a seven-minute TV story which stated incorrect and distorted historic claims about Georgia’s Russian occupied region of Abkhazia, saying that the territory “was handed to Georgia by the head of the Soviet Union Joseph Stalin.”

The Georgian Embassy to Germany has already reacted to the TV story aired by the first Channel of German Public Broadcaster on July 21. The TV story – Abkhazia - descending by a rope on the Soviet ruins - contained distorted historical facts. The letter has been sent to the broadcaster’s management and author of the story, stating that the historic facts provided in the story do not reflect the reality,” reads the letter.

The TV story released by the German Public Broadcaster:

The embassy has thanked the people who immediately reacted to the incident on social media. A petition has also been created, demanding an apology for the story.

Georgian Ambassador to Germany Elguja Khokrishvili says that the role of the media is high in combating hybrid threats.

We respect the freedom of expression of the journalist. However, in this case, the media plays a big role in shaping the public view, especially when it comes to the public broadcaster,” Khokrishvili said.

The story speaks of a parcours athlete, who uses abandoned buildings and areas to practice the sport.

The author of the story says that there are many such abandoned places in Tkvarcheli [a town located in occupied Abkhazia – the author pronounces the name incorrectly as Kvarchali].

The story says that in the beginning of 90s, due to economic problems and a war between Georgians and the Abkhaz [‘who were striving for independence’] the town was almost emptied, while 40,000 people lived there earlier.

The author says that the only ally of Abkhazia now is Russia and no Abkhaz think that they belong to Georgia, adding that Stalin loved the beautiful nature of Abkhazia and handed the region to Georgia.

Earlier in July Russian President Vladimir Putin also presented his own version on “how Georgia occupied Abkhazia and Tskhinvali.” 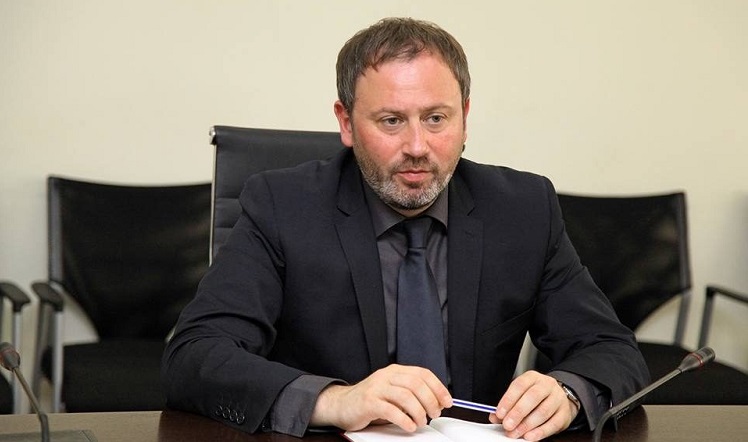 Georgian Ambassador to Germany Elguja Khokrishvili says that the role of the media is high in the time of a hybrid war. Photo: 1TV.

Speaking with the Russian media Putin said that South Ossetia joined the Russian Empire in the 18th century, while Abkhazia became a part of it in 1810.

While the Russian Empire was crumbling after World War I, Georgia attempted to engulf Abkhazia. An independent Georgian state was formed that occupied Abkhazia in 1918, assisted by the German troops. And the occupants behaved brutally," TASS cited Putin as saying.

Georgian officials have evaluated the statement an example of presenting historical facts in a “biased and an incorrect way.”

There are numerous materials proving Abkhazia and Tskhinvali have been historical parts of Georgia.

The arrival and settling of North Caucasian tribes on Georgian territory started in the 15th -17th centuries. One of such tribes made a settlement in the Abkhazia region as they faced problems in the North Caucasus.

South Ossetia is a historic Georgian area of Samachablo, where Ossetians settled in the 17th century.

Since the Russia-Georgia 2008 war only Russia, Venezuela, Nicaragua, Nauru and Syria have recognised the regions as independent states.The rest of the international community says that Abkhazia and Tskhinvali are integral parts of Georgia and that currently they are occupied by Russia.